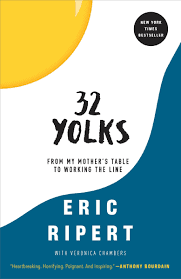 32 Yolks From My Mother's Table to Working on the Line

“My father died when I was young. That is the central tragedy of my life. But his spirit never left me, and that may be the defining miracle of my life.”

In his heartwarming memoir, renowned chef Eric Ripert recounts his challenging childhood, how he developed his passion for cooking and his journey beginning as a child in the south of France and the mountains of Andorra, culminating in receiving several James Beard Foundation Awards and highly coveted Michelin stars, and owning his critically acclaimed New York City restaurant, Le Bernardin. His mother fostered his love of cooking: “My mother worked six days a week at her boutique, but she cooked like a Michelin-starred chef every single night.”

Mentored by a kind, creative chef when he was just eleven years old, he fortunately disregarded what he’d been told about boys having no place in the kitchen. When he was seventeen years old, after completing a grueling apprenticeship which included performing dozens of mundane food preparation tasks and working from 8:30 AM until 11:00 PM, he moved to Paris and worked under world legendary Michelin-starred French chefs, where he learned discipline and perfected his skills. Initially, Ripert didn’t have the necessary stamina or strength to work the long hours or handle the physical labor. But being ambitious and a hard worker, he overcame his weaknesses. He writes about working under demanding and perfectionist personalities, progressing through the culinary ranks, the politics among the kitchen staff, and the competitive work environment. He also said one particularly daunting chef whom he worked for instilled in him that “every ingredient is sacred.” Despite all the challenges he faced, Ripert tenaciously pursued and achieved his dream. It’s a poignant, captivating story beautifully written by a compassionate and sensitive soul. 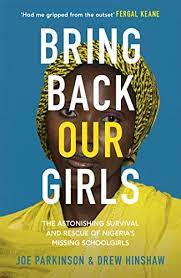 Bring Back Our Girls: The Untold Story of the Global Search for Nigeria's Missing Schoolgirls

by Joe Parkinson and Drew Hinshaw

In 2014, the Islamic terrorist group, Boko Haram (its name means “western education is forbidden”), led by Abubakar Shekau, the extremist leader, kidnapped 276 Nigerian schoolgirls from their school dorm in the middle of the night. This electrifying story chronicles how the school girls were abducted and what ensued afterwards. It also explores the phenomena of social media and how it impacted their abduction and eventual rescue. Russell Simmons, a famous hip hop producer tweeted the hashtag #BringBackOurGirls and within hours millions of Twitter users, including Michele Obama, Mary J. Blige, Pope Francis, and Oprah Winfrey, tweeted about the disaster, demanding their release. American and Nigerian soldiers, Swiss diplomats, South African mercenaries, and the same elite U.S. military aerial unit deployed to kill Osama bin Laden, became involved in the search for the captives as a result of social media.

The kidnapped girls heroically survived abuse and hunger by relying on their faith and providing emotional support to each other. The terrorists offered to marry them to fellow terrorists if they converted to Islam and promised the abuse would end if they did so. Some of the girls agreed to converting. Several moving personal stories related by former hostages about their years in captivity reveal the courage and resolve of these remarkable young women. A must-read, this meticulously researched book is absolutely enlightening and gripping. It’s “based on six years of reporting on four continents and interviews with hundreds of people, from presidents to former child soldiers.”

“Author Joe Parkinson is the Africa Bureau Chief for the Wall Street Journal and a Pulitzer Prize finalist currently based in Johannesburg. Born in the U.K., he is one of the Journal‘s most seasoned foreign correspondents, has reported from more than forty countries, and has won numerous international awards. Author Drew Hinshaw is a senior reporter for the Wall Street Journal and spent a decade covering West Africa.” 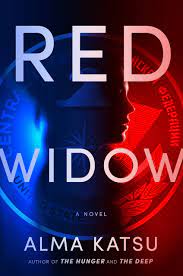 Lyndsey, a CIA agent, is the primary narrator in this high voltage thriller. A Russian spy is murdered and the CIA thinks there may be a mole in the Department. Lyndsey is assigned to Washington D.C. to discover who it is, if, in fact, there is one. Then there is Theresa, another CIA agent and wife of a former director who was killed in the field. She and Lyndsey become friends. As always, I don’t want to spoil the suspense by revealing anything else. I am confident readers will be mesmerized by this unpredictable, immersing story.

The author “spent three decades in intelligence as a senior analyst and in management at CIA and NSA. She currently is a consultant to government and private industry on technology forecasting and analytic methods. “