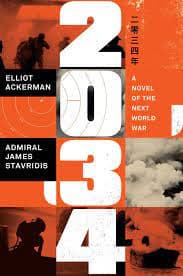 Speculative fiction is not one of my favorite genres but this phenomenal read had me glued to my chair until I finished it in one very late evening. A character-driven page-turner, it offers several viewpoints about the potential of the next world war, all extremely compelling. The U.S. adversaries in the novel are just as well-informed, well-armed, prepared, and capable as the U.S. Fatigue, miscommunication, complacency, lack of preparedness and cyberwar, can easily contribute to the possibility of war at any time. I’m loath to discuss anything further since it would be a shame to divulge much about this riveting, extremely thought-provoking book.

U.S. Navy Commodore Sarah Hunt, leads a flotilla of American warships through the South China Sea aboard the USS John Paul Jones. She thinks she is coming to the aid of an unidentified trawler. What follows is not what she anticipated.

Here’s a May 21, 2021 article from Reuters describing some of the real-life, present-day tensions in the area:

“The presence of hundreds [of] Chinese vessels inside the Philippines 200-mile Exclusive Economic Zone (EEZ) has been the latest source of tensions between the two countries in the South China Sea, through which $3 trillion worth of goods pass every year… The Philippines said the encroaching vessels were manned by militia, while Beijing said they were fishing boats sheltering from bad weather.”

Then there is “the row over the June 2019 sinking of a Philippine fishing boat by a Chinese fishing vessel that abandoned the Filipino fishermen in the South China Sea. The Philippine justice ministry will seek compensation for the victims, the DFA said.”

The authors are eminently experienced and savvy: Admiral Stavridis is a retired four-star admiral who served as the Supreme Allied Commander of NATO. He was the longest-serving Combatant Commander in recent US history. Following his military career, he served for five years as the 12th Dean of The Fletcher School of Law and Diplomacy at Tufts University.

Ackerman is a former White House fellow and Marine, who served five tours of duty in Iraq and Afghanistan, for which he received a Silver Star, Bronze Star for Valor, and Purple Heart. He is also the author of several highly acclaimed novels. According to Wikipedia, “Ackerman studied literature and history at Tufts University, graduating summa cum laude and Phi Beta Kappa in 2003, completing a special program in which he earned his bachelor’s and master’s degrees in five years, rather than the usual six. He holds a master’s degree in international affairs from the Fletcher School of Law and Diplomacy. He also completed many of the United States military’s most challenging special operations training courses.” 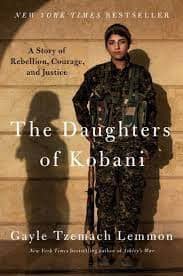 The Daughters of Kobani: A Story of Rebellion, Courage, and Justice

In 2014, in the town of Kobani, which borders Turkey in northeastern Syria, an all-female Kurdish militia fought and defeated the brutal ISIS (Islamic State of Iraq and Syria) forces. The intrepid women fought on the battlefield to prove their leadership in warfare, obtain freedom for their country, and obtain equal rights for women. Despite ISIS’s savage terrorist tactics including beheadings of both women and men, rape, torture, enslavement of women and children, and other atrocities, the Kurdish Women’s Protection Units (YPJ, a Kurdish acronym for Yekîneyên Parastina Jin‎) successfully defeated them in combat. The ISIS troops they fought were highly trained, armed with armored tanks and artillery. The YPJ fought ISIS without assistance until the United States finally provided help, and together they prevailed, forcing out the ISIS combatants. Up to 40% of the total resistance fighting force against ISIS was made up of Kurdish women. To their credit, these YPJ fighters, who included battlefield commanders and snipers, earned the praise of U.S. Special Operations Forces and the “full respect of the men they served with in the YPG (Yekîneyên Parastina Gel, the People’s Protection Units, which were the all-male YPJ counterpart).”

Both the YPJ and the YPG had more specific objectives than just defeating ISIS. Their Social Contract included mandated representation and equal rights for women, self-governance, and respect for their Kurdish identity. Such an admiral and contrasting goal considering ISIS wants to return to medieval times, with the continued subjugation of women!

Sadly, in 2019, U.S. forces from northern Syria were withdrawn, abandoning Kurdish allies and ceding the political power on the ground to Turkey. Turkey considers the Kurdish people to be terrorists, and treats them as such. After the withdrawal of U.S. troops, Turkey created a “safe zone” along the border which they and Russia now control.

One of the women featured in the book who previously led 4,000 fighters in combat, Rojda, said, “It is really painful to have to fight Turkey in the same places we liberated from ISIS.”

Since the 1950s, although they only comprise ten percent of the population in their own country, it’s been illegal for Kurdish people to speak their own language or to own property. They are denied citizenship and cannot even celebrate their traditional Kurdish holidays.

Author Gayle Tzemach Lemmon, spent three years researching and interviewing people in the Middle East for this monumental and informative book. According to the website for the Council of Foreign Affairs (where she is an adjunct senior fellow), she is also the author of Ashley’s War and The Dressmaker of Khair Khana; writes on national security and foreign policy issues, on Afghanistan’s politics and economy, and issues affecting women and girls. Lemmon graduated summa cum laude from the University of Missouri with a bachelor’s degree in journalism, received an MBA from Harvard and speaks Spanish, German, and French, and is conversant in Dari. 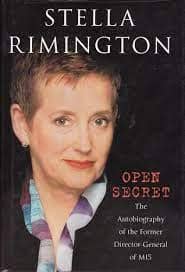 Open Secret: The Autobiography of the Former Director General of MI5

“You have to want to serve the country, because it’s not a career where you’re going to make a fortune. They’re not looking for people who want to be James Bond, they don’t want exhibitionists. It’s about teamworking, doing something important for the country and being prepared to do it behind the scenes.” – Dame Stella Rimington

MI5’s first woman Director General, Stella Rimington, served as director of all three branches separately prior to attaining the pinnacle of her career at Britain’s MI5, which included overseeing all three branches. The services cover counter-subversion, counter-espionage and counter-terrorism. Rimington worked for Britain’s MI5 between 1969 and 1996. She began her career as a clerk typist in India where her husband had been posted as a diplomat. She explains in her eye-opening memoir, that when the West’s intelligence was unsuccessful, the consequences to the West were often terrible. For instance, “the loss of submarine technology through the Walker family in America cost millions of dollars,” or when Pan Am Flight 103 was blown up by terrorists over Lockerbie, killing 257 people.

“It is an established fact that the anti-nuclear movement, in its own right an entirely legitimate protest movement, was of great interest to the Soviet Union. As part of its subversive activities in the West, the Soviet Union sought covertly to encourage anti-nuclear, ban the bomb, and other such protest in many Western countries, as a way of weakening the defences of their enemies. Countries of the Soviet Union bloc, sheltered, armed, and encouraged the terrorists as a way of weakening the West, as did some other countries such as Syria, Iran, and Libya. Tackling terrorism was the most significant reason in altering the MI5 culture. It brought a new level of danger to staff, the public and infrastructure. The KGB were gentlemen compared to the terrorists.”

She believed the public needed to understand what occurred in the agency so she established transparency within MI5. Rimington was also the first Director General to be identified to the public. In the past there was no publicity about the Director Generals. Everything was secret. After she retired she wrote ten terrific espionage thrillers. I reviewed daughters At Risk in February of 2020.