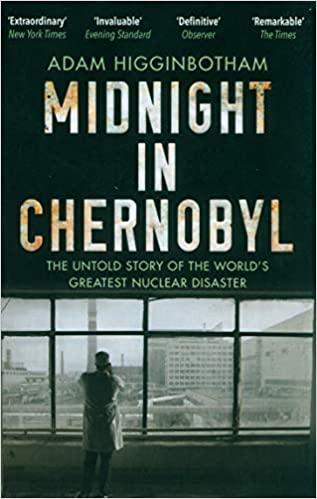 Midnight in Chernobyl : The Untold Story of the World’s Greatest Nuclear Disaster

The explosion on April 26, 1986, at the Chernobyl, Atomic Energy Station in what was then the Ukrainian Soviet Socialist Republic, was the worst nuclear accident in history. It is estimated that 1,838 square miles of land became uninhabitable, contaminated by radiation. Two days after the explosion, Sweden detected elevated radiation and international alerts forced the Soviets to admit an explosion had occurred, refusing to disclose all the damage that occurred.

The real story of the accident was shrouded by the Soviet’s propaganda, pride, secrecy, arrogance and  subterfuge. In fact, any accident that happened at the site through the years was considered a State secret and covered up. In the end a confidential report determined inferior workmanship, deferred maintenance, major design defects such as thermohydraulic instabilities, and the secretive bureaucracy were some of the causes of the catastrophe.  No action was ever taken to correct any of these  problems, or to alert personnel at the facility about the probability of future accidents occurring.

The Chernobyl engineers were forced to make and construct their own designs, amidst malfunctions and increased bureaucratic demands for meeting deadlines, causing them to ignore rules, not realizing the potential for a future disaster. The misinformation provided to the residents of  Pripyat, the town where the  Chernobyl nuclear power plant reactor was located, the Soviet government’s deception, and the trial of the scapegoats are just some of the alarming issues examined by the author.  His stories of the resolute & brave people involved are both poignant and enlightening. I felt I was there feeling their frustration trying to achieve their goals, while working with faulty equipment and the hardline Moscow bureaucracy.  “In the years that followed (the Chernobyl accident), there would be even more serious accidents at nuclear plants elsewhere in the Soviet Union, and all of them would be covered up.”

Interestingly, in 1957 another similar nuclear disaster occurred which the Soviets denied. “The CIA resorted to sending high-altitude U-2 spy planes to photograph the area. It was on the second of these missions, in May 1960, that Francis Gary Power’s aircraft was shot down by a Soviet SA-2 surface-t-air- missile, in what became one of the defining events of the Cold War.”  Because of Soviet censorship , this nuclear accident was hidden from the world and the International Atomic Energy Agency for over 30 years. 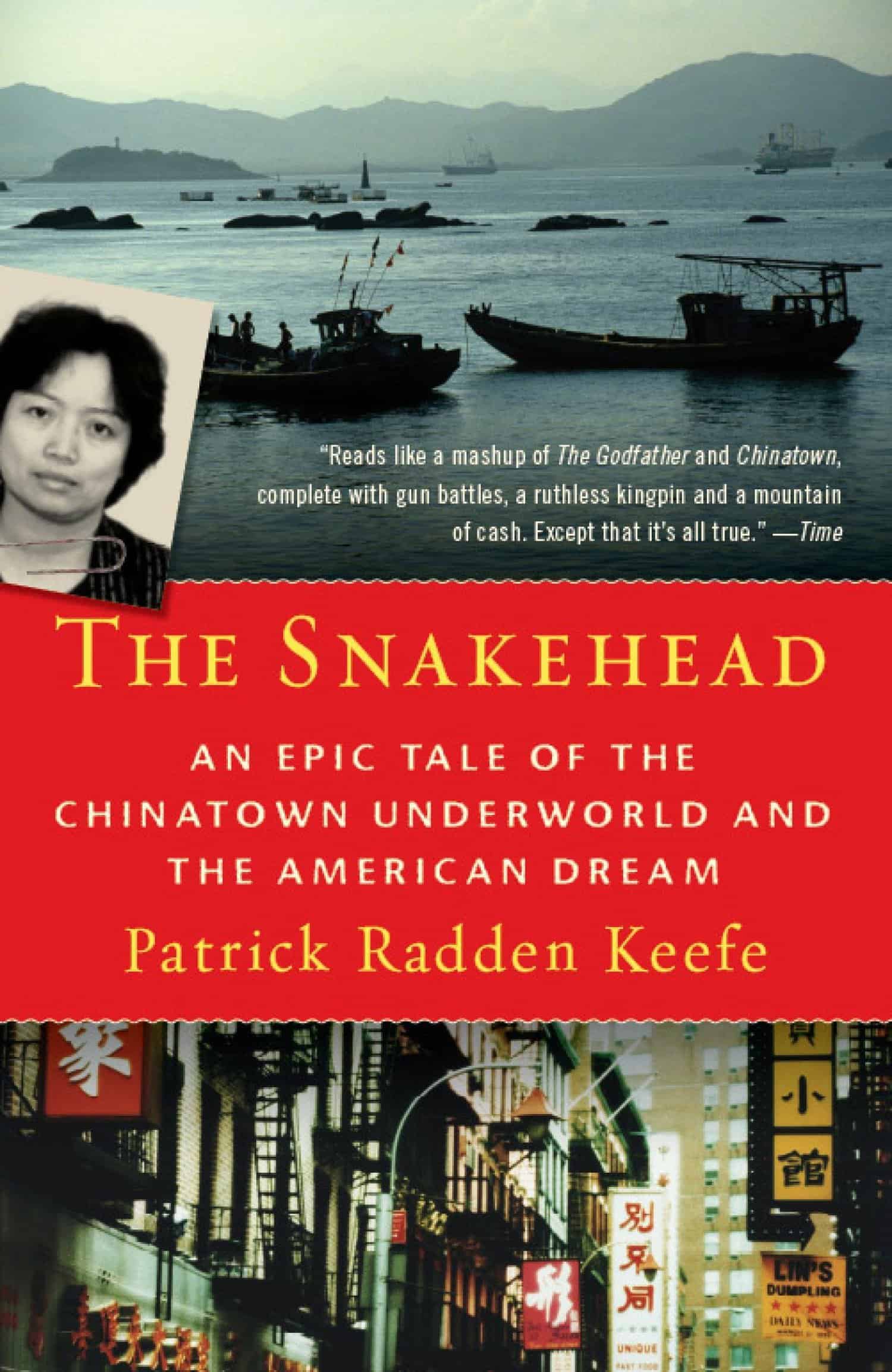 Snakehead : An Epic Tale of the Chinatown Underworld and the American Dream

Snakehead is the engrossing, well-researched story about an international  multi-million dollar smuggling ring that brought undocumented immigrants from China to New York City in the 1980’s & 1990’s. A brilliant narrative, perspectives from the immigrants, the smugglers, & law enforcement are all presented. Keefe conducted over 300 interviews with them, including many from residents and community leaders, to understand how the highly complicated criminal smuggling networks operated throughout Asia, Central America, Kenya. Russia, and Canada. His focus is specifically on immigration from Fujian Province where most of the book’s Chinese people originated. according to the author, “No dialogues or scenes are invented”.

One of the first “snakeheads”  was Cheng Chui Ping, known as Sister Ping. She started her ring in 1982.  A snakehead is the Chinese nickname of the boss in a human smuggling ring. Ping was the FBI’s most wanted Asian criminal in the 1990’s. Her smuggling ring was one of the largest and most sophisticated in the world at the time. She had pioneered the China- to- Chinatown route in the early 1980’s” , and became  “one of the most reliable-and- successful snakeheads on the planet.” “In Chinese communities from Europe to South America to  the United States, she had a trustworthy reputation as a human smuggler. “   An astute business person, she operated from her modest store in New York City’s Chinatown from 1994 to 2000. She bought old cargo ships and bribed international harbor officials around the world. The Chinese were smuggled to the U.S. via cargo ships. Sometimes they were smuggled through Canada or Mexico. Ping mainly smuggled Fujianese people, since she’d immigrated from a village in Fujian Province and they knew her and her reputation.  The people she smuggled were willing to pay the initial fee and work as indentured servants for years to pay off the smugglers who financed their trip, upwards of $35,000, making her very rich.

After the 1989 Tiananmen Square massacre , President George H.W. Bush’s 1990 directive  stated the United States stood by those whose rights were trampled by oppressive governments. He wanted to provide asylum to political dissidents and those fleeing China’s repressive one child per family policy. Green cards were approved for any Chinese who arrived prior to 1981, regardless of how they arrived. The directive also included a safe haven for 80,000 Chinese students. Unfortunately these policies caused snakeheads & their business to flourish and  President Clinton later rescinded the Directive.

Author of the acclaimed  Say Nothing: A True Story of Murder and Memory in Northern Ireland,  Keefe is a graduate of Columbia University and Yale Law School, an M.Phil. in International Relations from Cambridge University, and an M.Sc. from the London School of Economics. 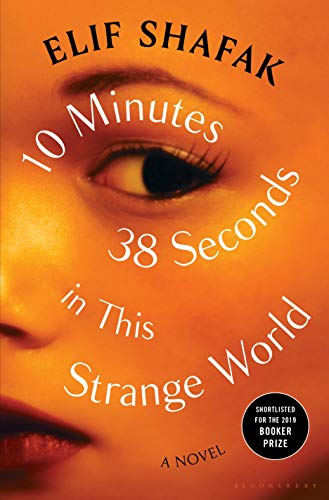 10 Minutes, 38 Seconds in this Strange World

“In the first minute following her death, Tequila Leila’s consciousness began to ebb, slowly and steadily, like a tide receding from the shore. Her brain cells, having run out of blood, were now completely deprived of oxygen. But they did not shut down. Not right away …”

Medical research indicates brain activity can continue for up to 10 minutes and 38 seconds after the heart stops beating.  Tequila Leila, a prostitute, reflects upon her life and those of her five beloved friends whom she considers family, all of whom are considered social outcasts by Turkish society. She is buried in the Cemetery of the Companionless, an actual cemetery in Istanbul, where the voiceless & “undesirables” are buried. This enriching novel reveals the deeper truths about Turkey’s human rights and how they impact its people from the perspectives of the so called “outcasts”— suicides, sex workers, etc.

Shafak was prosecuted by the Turkish government in  2006 for “insulting Turkishness” for her remarkable novel  “The Bastard of Istanbul “which discussed the Armenian genocide, a taboo subject the government denies happened. A passionate advocate for human rights, her controversial books usually address her country’s egregious violations, while describing the singular history and diversity of Turkey. One exception is her mesmerizing Forty Rules of Love, which I previously reviewed along with The Bastard of Instanbul.