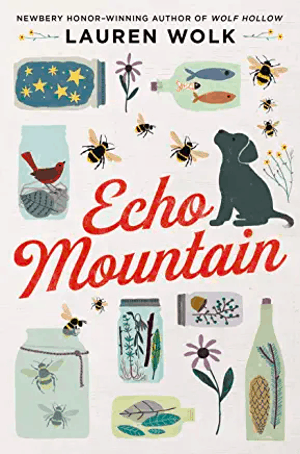 After reading the last page of Echo Mountain, I was not ready to part with such an engaging and admirable character as Ellie.  Her expressive, almost poetic, observations of her world and the people who were part of her days ring with clarity and genuineness. She is a character I would look forward to meeting again in the world of Wolk’s juvenile fiction.

Ellie weaves a captivating story of her family’s new life in the forests of Echo Mountain, having moved from a nearby town.  It is the time of the Great Depression and her parents, who no longer have gainful employment, find themselves depending on their own abilities and hard work as they build their own cabin and provide sustenance for their family.  Ellie, along with her father, see this new chapter as an adventure as they feel a deep connection with the world of nature about them. However, Ellie’s mother and older sister, Esther, find adjustment to this new way of living, difficult.  Samuel, Ellie’s younger brother, is a ball full of energy who easily adapts to new experiences and adds a lightness to Ellie’s story.

Life for Ellie’s family takes a tragic turn when her father suffers a head injury from an accident and falls into a coma.  Each family member meets this new challenge in their own unique way.  Ellie, sensitive to the needs and rhythm of nature due to the teachings of her father, seeks out natural healing secrets from “the hag” who lives further up the mountain.  In so doing, Ellie becomes intwined in other lives and finds herself being pulled in more than one direction.  Conflicts abound. She wisely reflects, “It would take a lot of work to be a character in both stories without becoming two characters. Or one, split in half.”

Ellie is one who engages in life fully. In her words, “… life is a matter of moments, strung together like rain. To try to touch just one drop at a time, …..was impossible.  To stand in the rain was the thing. To be in it.” Echo Mountain is a testament to the precious bonds of family, the grace that comes with the ability to recognize one’s own misconceptions and the possibilities in life when one meets them head on with an open heart and determination. 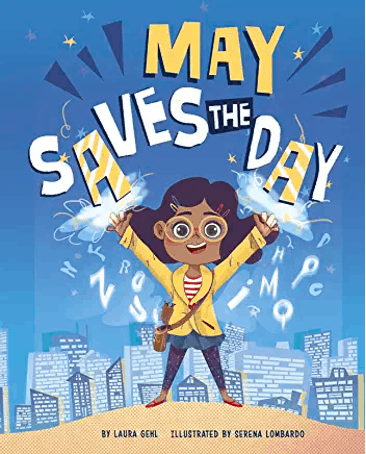 May Saves the Day, by Laura Gehl, illustrated by Serena Lombardo

Not only is young May an admirable role model for aspiring young business women, she is also a lover of words and their ability to come to the rescue when needed!  Her company, Word Saver, Inc., relies on May’s stash of letters to transform threatening situations. Thus, a horde of mad bees heading for a nearby playground is defeated when May launches a T into the sky, changing those bees to beets which the children gleefully gather up.  There May meets Stu, who nimbly gets around in his wheelchair and shows off with his lasso skills.  So impressed with May’s abilities, he suggests he become her sidekick. But independent May doesn’t feel the need for an assistant until a dire situation proves that a talented partner is just what she needs!

Lombardo’s colorful, bold illustrations are filled with action along with the large bubble lettered words that magically change into new words that rescue all!  May Saves the Day is a word play adventure which delightfully demonstrates the advantages of teamwork 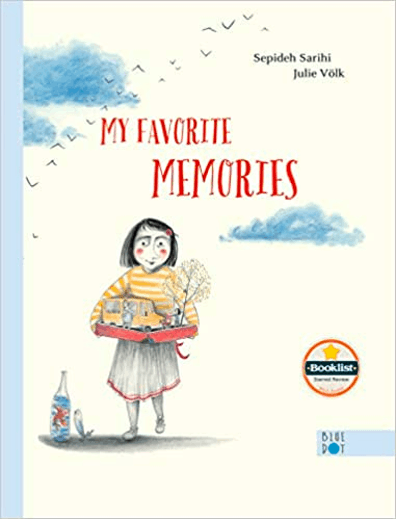 My Favorite Memories, by Sepideh Sarihi, illustrated by Julie Völk

My Favorite Memories is a sensitive story of change, loss and acceptance.  The young narrator has learned from her excited parents that their family will be moving to another country.  They give her a new suitcase in which to pack her favorite things. The young girl reflects on the many special objects that are part of her life which she wishes to take with her. Sadly, they will not “fit” in her suitcase such as her aquarium, a pear tree planted when she was born, and the jolly school bus driver who always serenaded his young passengers. Even her best friend will have to be left behind.  And then there is the ocean, also a favorite, which fortunately laps against the shore of her new home as well.  With that thought, her imagination finds a comforting solution to the loss she is experiencing.  Acceptance and hope follow.

Völk’s soft black and white illustrations are reminiscent of Iran, the home country of Sarihi before moving to Germany. The soft splashes of color focus on the girl along with some of her favorite memories.  Sarihi creates a gentle depiction of the heartache in leaving what is familiar and learning to open up to changes.