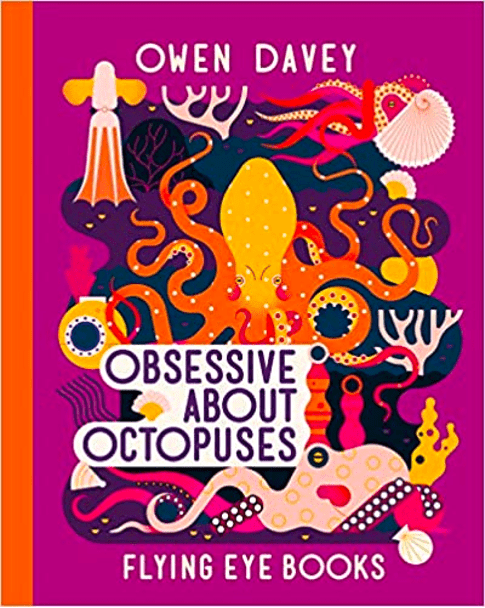 As many of you already know, our Summer Reading Program’s theme is Ocean of Possibilities. Thus, our weekly programs have been focusing on the varied and fascinating water worlds that make up our planet Earth. In order to support our summer’s theme, we have added a collection of outstanding new books on topics such as amazing sea animals, coral reefs, famous oceanographers, ocean ecology and conservation, and more. You will find them displayed in our book cart, as well as on top of the book shelf across from the cart, in the Pearl Children’s Room.

Below are highlighted three of our new books – a sampling from the “oceans of possibilities” in reading when it comes to diving into our oceanic world.

Obsessive About Octopuses, by Owen Davey

Octopuses are one of the more amazing inhabitants of our oceans. They have eight legs, three hearts, and around 280 suckers per arm. They come in all sizes, from the pygmy octopus, which measures only an inch, to the giant Pacific octopus, which can grow to 10-16 feet long.

Octopuses “dress for success” as they have the astonishing ability to change the pattern, color, and texture of their skin in a blink of an eye! These are only a few of the fascinating attributes of the octopus which Davey elaborates on. With each turn of the page, one is met with colorfully explicit illustrations, along with concise paragraphs which detail the various peculiarities of this incredible creature. Obsessive About Octopuses is a book definitely worth exploring! 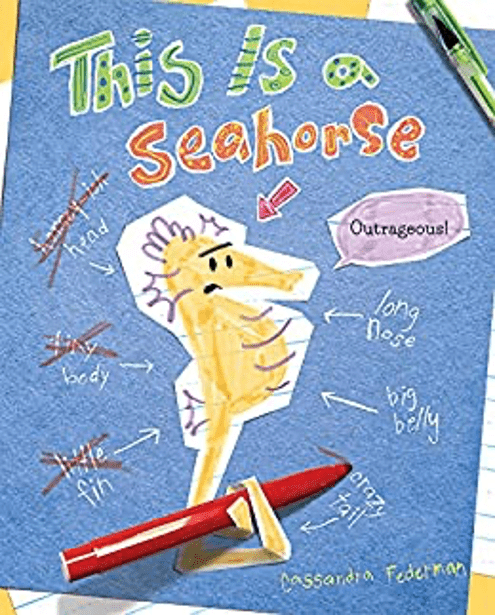 This is a Seahorse by Cassandra Federman

Federman has come up with a unique approach in writing about her chosen subject, the seahorse. A young student has been given the classroom assignment of writing a report about one of the animals she has learned about on her class field trip to the aquarium. Across school-lined paper one sees her child-like script as she writes about the interesting characteristics of this unusual creature.

Along with the young girl’s reporting is an animated drawing of the seahorse himself, who is constantly commenting or correcting her observations, adding a fun take to This is a Seahorse! The last two pages are a spread created by the seahorse character with amazing facts which our student author failed to include. On finishing this entertaining book, a child will have learned about this fascinating animal and had lots of laughs along the way!

Solving the Puzzle Under the Sea, Marie Tharp Maps the Ocean Floor by Robert Burleigh, illustrated by Raúl Colón

Narrated in first person, the young reader is introduced to scientist, Marie Tharp. She is a little-known geologist and cartographer who not only mapped the ocean floor, but provided evidence supporting plate tectonics and continental drift. Marie tells her story, from the struggles to being recognized as a scientist by the male scientific world of the time to the careful, detailed work that engaged her as she gradually mapped the ocean floor.

Curiosity and determination propelled her as she plotted the ocean’s depth leading to the discovery of the Mid-Atlantic Ridge and the rift between the mountain peaks. Tharp’s significant story is supported by Colón’s gentle watercolor and pencil illustrations, which add immediacy and clarity to the narration.

Burleigh adds a concise biography of Marie Tharp at the book’s end, along with a brief glossary of important words and phrases, internet links to explore, and finally, suggestions to young readers of activities they might engage in to further their own experiences and thinking.