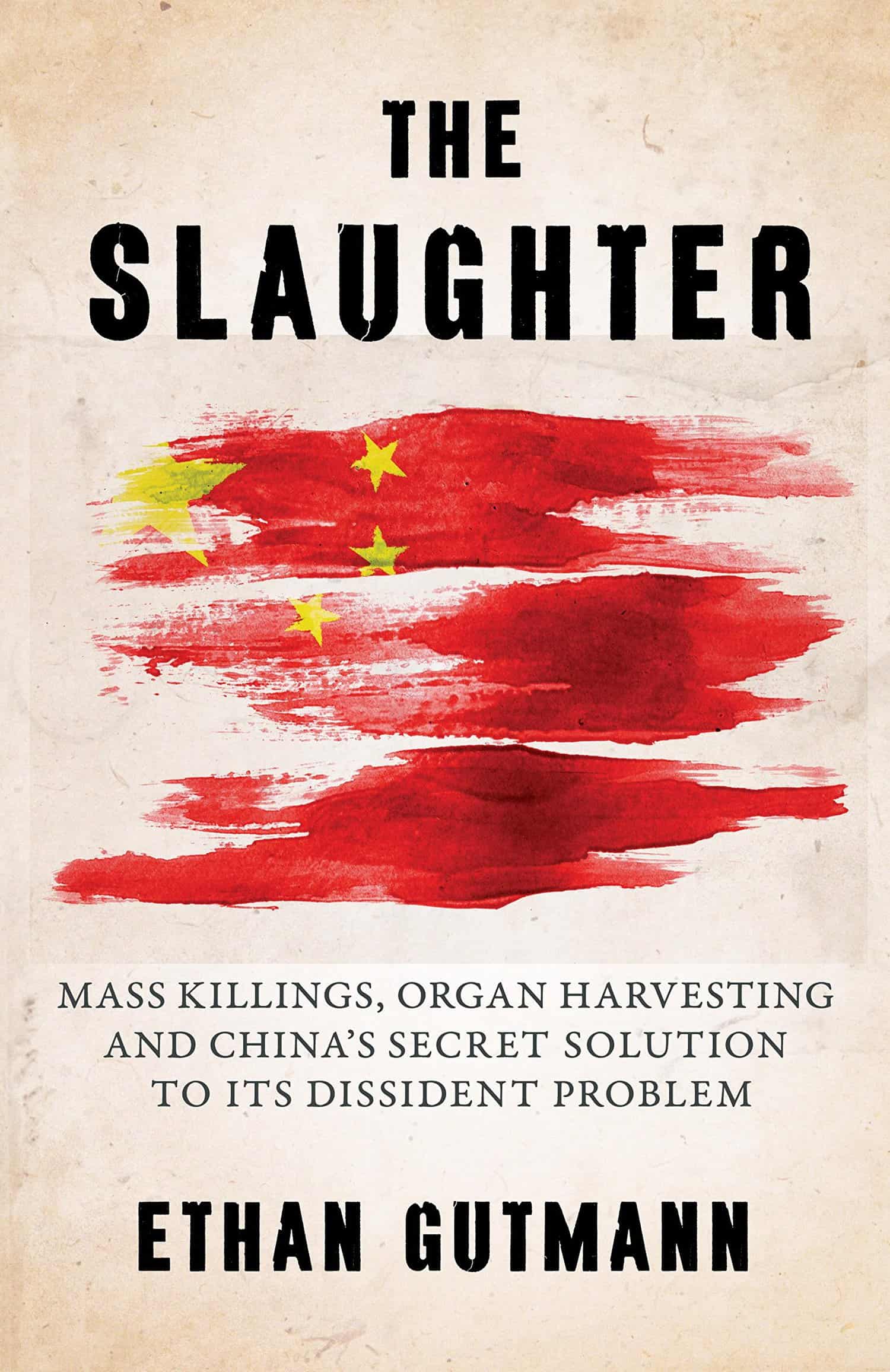 “Organ harvesting: the surgical removal, often without anesthetics, of healthy organs without the consent of the ‘donor’ and transplanted to order into the bodies of people able to pay the high prices.”

“The organ harvesting trade is driven by demand from organ tourists.”

An ancient Chinese spiritual discipline in the Buddhist tradition, Falun Gong consists of moral teachings, meditation, and gentle exercises that are considered to promote health. It includes living in accordance to teachings based on the principles of truthfulness, compassion, and tolerance. It became extremely popular in China throughout the 1990s. The state supported Falun Gong, until an official survey indicated there were over 70 million practitioners by 1999 – more than the number of members in the Chinese Communist Party (CCP). In July 1999, the CCP leader at the time, Jiang Zemin, grew “disturbed by the size and independence of the practice, and viewed its moral philosophy as being incompatible with the Party’s atheism.” Jiang decided the CCP must eradicate Falun Gong. By mass murdering and harvesting the dissidents’ organs, they rid themselves of them, “while making a profit at the same time.” Falun Gong prisoners of conscience drive the country’s multi-billion dollar, state-sanctioned organ harvesting industry. These prisoners are not criminals; they merely have different religious views. Tragically, governments around the world are aware of this horrific practice.

Most of the book is not about graphic depictions of organ harvesting. As the majority of organs harvested are from imprisoned Falun Gong practitioners, this book is about the adherents, the survivors, and their abuses by the CCP. Research includes interviews with top-ranking police officials and Chinese surgeons (“the new executioners,” according to Gutmann) who have murdered prisoners on the operating table, “organ tourists” (patients who travelled to China for organ transplants), and survivors of forced labor camps. The first known case of harvesting organs from a political prisoner occurred in the 1970s, when a woman was executed and her kidney was transplanted into the son of a senior party cadre.

Gutmann proposes a reasonable estimate of mass murder from the 1990s to 2014 to be made up of 65,000 prisoners of conscience, minority Uyghur activists, Tibetan monks, and predominantly Falun Gong practitioners. One of Gutmann’s interviewees was an officer who was assigned to a special Gestapo-like police force, “the 610 Office,” which was created on June 10, 1999, specifically to persecute Falun Gong practitioners. He described the “killing grounds” where executions would take place. Unwanted bodies would be “kicked into a trench, the useful corpses hoisted into the harvesting vans.” These vans would be lined up nearby, equipped with crude operating facilities and a medical team. “One day, he heard screams coming from one of the vans and discovered what was happening. Some of the ‘executions’ were actually taking place on the operating table inside these vans – with no anesthesia, since organs from live donors were less likely to be rejected.” Most of the unwilling organ donors are still awake during the extraction of organs – kidneys, hearts, corneas, etc. The “donors” are injected with anti-coagulants prior to harvesting. By the early 2000s, amidst more sophisticated techniques and after the construction of new hospitals, over 1000 Chinese hospitals were conducting thousands of transplants a year.

“‘Bodies… The Exhibition’ is an exhibition showcasing human bodies that have been preserved through a process called plastination and dissected to display bodily systems. It is similar to, though not affiliated with, the exhibition ‘Body Worlds’ (which opened in 1995). The exhibit displays internal organs and organic systems, bodies staged in active poses, and fetuses in various stages of development. Concerns have been raised by human rights advocate that the bodies are those of executed Chinese prisoners, and that the families of the victims have not consented.”

During the time now-Governor Andrew Cuomo was New York’s Attorney General, he pressed for an investigation of these exhibits and ultimately reached a settlement and banned them from the state. The owner of “Bodies” sells hundreds of plastinated bodies to medical schools worldwide for educational purposes at $21,000 per body. Although he claims he obtains them from legitimate sources, no outsider has verified this.

I read Slaughter in 2014 when it was published and wanted to review it here, but it’s such a disturbing subject matter, I put it off. This is not an easy book to read, yet it’s important for people to know about the atrocities wrought by the Chinese government/Chinese Communist Party. Later the same year, I was in the Plaza Mayor in Madrid and was gratified to witness a moving, peaceful parade of Falun Gong practitioners dressed in traditional dress. Their goal was to raise awareness of the Chinese government’s brutal persecution and slaughter against them.

Chinese citizens are not the only Falun Gong followers targeted. A Canadian citizen and business person, Sun Qian, was arrested in Beijing in 2017 and has been imprisoned since then. She was sentenced on June 30, 2020 by a Beijing court to 8 years in prison. According to Rabbi Dr. Reuven Bulka, Chairman of the Committee to Investigate the Persecution of Falun Gong-Canada, for about $200,000 in China, you can get a new kidney on demand, and then if that new kidney doesn’t work, you’ll have another backup kidney for you in another week. In 2007, Israeli health providers announced their decision to stop funding Israelis going to China for organ transplants. Some 300 Israelis had previously traveled to China each year for organ transplants. Data from David Kilgour, a former Crown prosecutor and Secretary of State for Canada, and international human rights lawyer David Matas, state in their updated 2016 report, “Bloody Harvest: Report into Allegations of Organ Harvesting of Falun Gong Practitioners in China,” 60,000 to 100,000 transplants may take place each year in China. The regime claims only a fifth of that amount, or 20,000. Profits are estimated at “12 billion dollars and beyond.” Hospitals say this practice is their “number one money maker.” 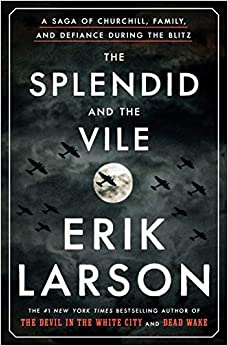 The Splendid and the Vile: A Saga of Churchill, Family, and Defiance During the Blitz

“You have enemies? Good. That means you’ve stood up for something, sometime in your life.”

“A new electricity surged through Whitehall. Subdued corridors awoke. This new energy, unfamiliar and disconcerting, coursed through all bureaucratic strata, from the lowest secretary to the most senior minister. Churchill conducted meetings in his bath or in bed, and from the moment he awoke until time he went to bed he had a typist available nearby.”

Erik Larson has written another riveting winner. He chronicles Winston Churchill’s first year as prime minister, how he tried to convince President Franklin D. Roosevelt to help England in the war effort and join the Allies, and discusses how Churchill saved the United Kingdom from being vanquished by Hitler. Not only did Churchill beg Roosevelt for over a year for assistance, he reassured and provided hope to the British people of their eventual victory, despite the dark days ahead amidst the rationing, and bombings. As the U.S. was strongly isolationist, Roosevelt was worried how it would affect the outcome of an upcoming election which would extend his presidency for a third term. After he was elected, he still stalled and was not convinced joining the Allies against the Nazis was a good idea. His advisor, Joseph Kennedy (President John Kennedy’s father) disliked Churchill and filed negative reports regarding Churchill’s character. Kennedy was a staunch isolationist, and as the American ambassador to Britain, advised Roosevelt against entering the war.

When Japan bombed Pearl Harbor on December 7, 1941, Roosevelt declared war on Japan. After Hitler declared war on the U.S. four days later, the U.S. officially entered the war against Germany. Finally Churchill could breathe easier. If Hitler hadn’t declared war on the U.S. ending its neutrality with Germany, the British Empire would have been defeated by the Nazis in all probability. The Blitz killed thousands of English people, and London was almost demolished by the Luftwaffe’s bombs and incendiaries. Between September 7, 1940 to May 11, 1941 when the Blitz ended, 29,000 citizens were killed and 28,556 were injured. The loss of civilian lives between 1949 and 1941 totaled 44,652, with 52,370 civilians injured. From Wikipedia:

“The Blitz was a German bombing campaign against the United Kingdom in 1940 and 1941, during the Second World War. The term was first used by the British press and is the German word for ‘lightning’. The Germans conducted mass air attacks against industrial targets, towns, and cities, beginning with raids on London.”

The book’s narrative doesn’t entirely focus on Churchill. It also provides intimate portraits of his wife Clementine, his son Randolph, daughter Mary, and their family life. He does of course address Churchill’s foibles and eccentricities. Churchill’s private secretary Jock Colville’s detailed diary provided much information and insight for Larson. Initially, Colville didn’t think much of Churchill. However, by the time he left his position with Churchill to train as a fighter pilot, he met with Churchill one last time: “I went out of the room with a lump in my throat such as I have not had for many years.” Larson, as usual, conducted meticulous research in writing this thrilling book. 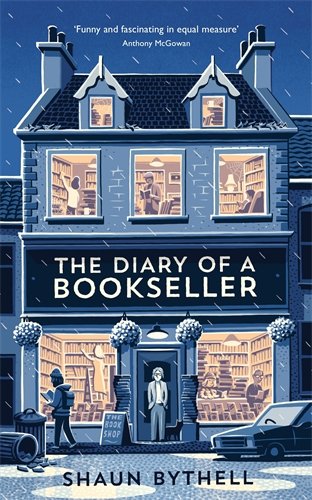 The Diary of a Bookseller

Written in a diary format, this is a hilarious account of running the second largest secondhand bookshop in Wigtown, Scotland. Readers meet Shaun Bythell, the bookseller, and his eccentric employees and frequent customers, along with some wacko customers who ask the most bizarre questions, such as:

1. So what is The Book Shop? Do you sell books or what? Do people just come in and take them? Is that what happens in here?

2. My book club`s choice is Dracula. But I don’t know what he has written.

3. Are you having a bonfire? For your books? I’ve never seen such rubbish, all they are good for is a bonfire.

With gentle humor, Shaun, a benign curmudgeon, pokes fun at his customers and employees. He discusses how booksellers acquire their books and notes the daily exploits of the shop. I assure you, you’ll laugh out loud at his observations.