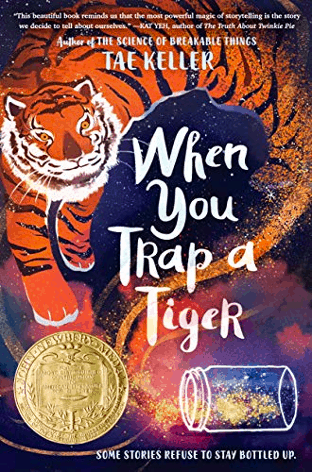 When You Trap a Tiger, written by Tae Keller (Winner of the 2021 Newbery Medal)

The magic of stories and the bonds of family intertwine in this beautifully crafted story by Tae Keller. Lily and her older sister, Sam, along with their mother, have moved to Washington from California to be with the girls’ Korean grandmother, their Halmoni, who is ill. As Lily tells it, her shyness makes her feel invisible, while bold Sam seems to have friends stick to her no matter the circumstances. But Lily’s gift for seeing beyond the everyday and her belief in the power of stories propel this tale of love and forgiveness.

With an aura of magical realism, Lily sees the tiger for the first time in the road on a rainy night. This is the beginning of her tiger drama. She senses this creature is on the hunt for the stories which her Halmoni says she stole from the magical tiger many years ago. If Lily can release these stories back to the tiger, then perhaps, in exchange, she can rid Halmoni of her illness. In her determined pursuit, she meets derision from Sam and misunderstanding from her mother. Along the way, however, her quest leads to the discovery of a new friendship and, in the end, a new sense of family. Perhaps, most importantly, she sees more in herself than she ever realized. Lily gains a new confidence. “…I can be brave. I can be anything. I am a girl who sees invisible things, but I am not invisible.” 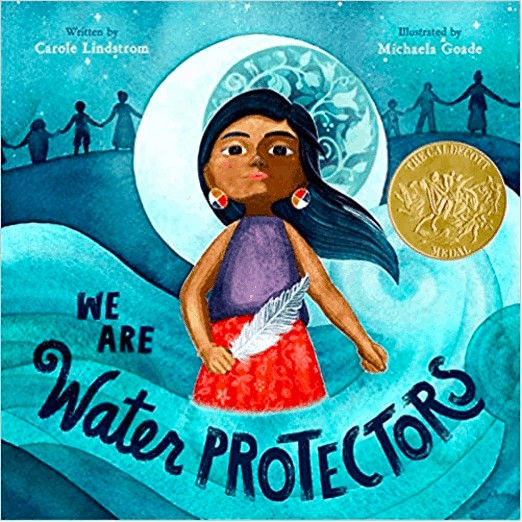 We Are Water Protectors, written by Carole Lindstrom, illustrated by Michaela Goade (Winner of the 2021 Caldecott Medal)

Told in the voice of a young Native American girl, We Are Water Protectors conveys the sacredness of water to earth and all its inhabitants. When the purity and supply of water is threatened by the “black snake,” she calls on her people to stand together to protect the creatures of the earth who cannot fend for themselves. Lindstrom’s pictorially-woven text expresses the heartfelt plea for all to value the lifeblood of water followed by a call for action to save its purity.  Goade’s illustrations flow through the pages as she depicts the essence of water and its power to touch all living creatures. Her stunning art speaks of the beauty of nature and provides a stark contrast to the black snake, which she illustrates as a representation of oil pipes marring the earth.

Both of Native American ancestry, Lindstrom and Goade, in creating this award winning picture book, were inspired by the Standing Rock Sioux Tribes stand against the Dakota Access Pipeline in 2016 in North Dakota. Each has penned notes at the book’s end which provide background for not only the book’s theme but the origins of some of Goade’s images. 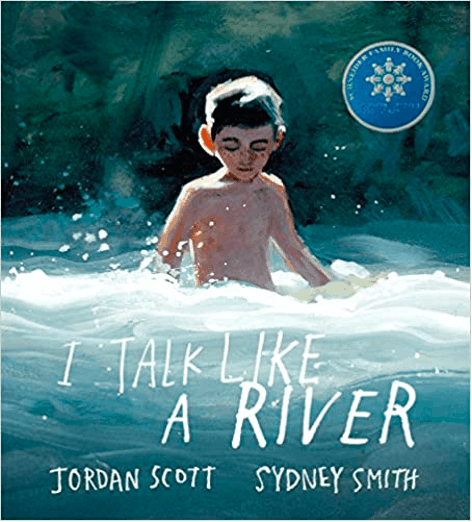 I Talk Like a River, written by Jordan Scott, illustrated by Sydney Smith

Winner of the 2021 Schneider Family Book Award – Honors an author or illustrator for a book that embodies an artistic expression of the disability experience for child and adolescent audiences.

Based on Jordan Scott’s own experiences, I Talk Like a River is a profoundly moving account of a young boy who stutters. Scott’s poetic phrases convey to his reader a sense of the boy’s experiences on his “bad speech” days. In turn, the reader feels the warmth of the gently intuitive support he receives from his father. His sensitivity helps his son see that his speech, reflected in the bubbling and gurgling of the river, is a valid part of the natural world. The artwork of Sidney Smith beautifully captures the boy’s emotions and thoughts. This is a book not to be missed – an artistic creation that shares another’s perception of his private world.