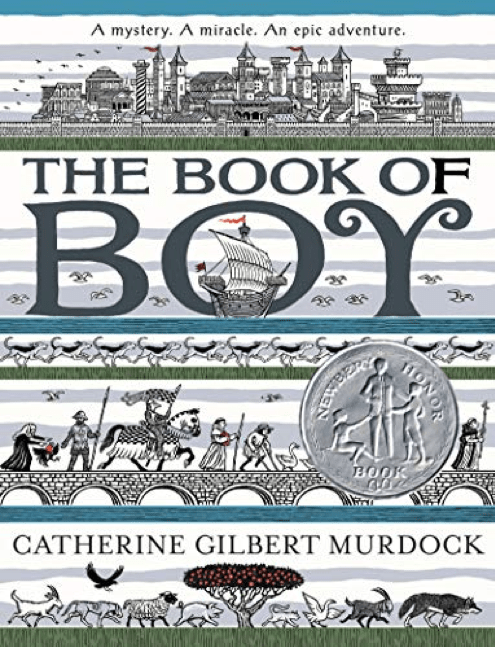 The Book of Boy

The Book of Boy is a skillfully crafted tale set in 1350 in France and Italy when thousands of Christians committed themselves to lengthy pilgrimages to the city of Rome.  The bubonic plague had recently devastated the population of Europe.  Many of Rome’s glorious buildings had been destroyed by a civil war followed by the earthquake of 1349.   It is within this setting that The Book of Boy unfurls its adventure.  Two unlikely companions – Secondus and Boy – are bound to one another as each seeks a personal salvation in the city of Rome.  Secondus, who cuts a fearsome figure and is in poor health, seeks to collect  six religious relics to place in the tomb of St. Peter in order to receive salvation and join his wife and son in heaven.  Boy, a hunchback, who has lived his life being teased and looked upon derisively, wishes to reach St. Peter’s tomb in hopes that he may receive a blessing which will transform him into an ordinary boy.  Boy reflects innocence and pure goodness while the older Secondus is not bound by moral constraints on his purposeful journey.  Their adventure to Rome includes encounters with knights, beggars, robbers, and wolves. The author also employs a magical realism which adds to the overall sense of   mystery and wonder.  Even a bit of wit and humor can be gleaned in this sometimes dark tale.

The Book of Boy can be a challenging read with the unusual historical setting and a narrative style that fits the time period.  A map at the end, along with the author’s  notes, might be more helpful at the book’s beginning providing the reader with important contextual information.  Receiving a 2019 Newbery Honor award, The Book of Boy is a unique contribution to children’s literature.

Catherine Thimmesh has a ready audience for her non-fiction book on the giant panda, for what child is not drawn to these cuddly, adorable creatures.  Her book has been named a 2019 Siebert Honor Book – an award given for outstanding informational books for children.  The pandas’ natural habitat is in China where they are now listed as an endangered species.   China’s effort to reverse this trajectory is a fascinating story of cooperation, determination and creativity.

China was at one time home to 23,000 pandas.  However, by the 1980’s only one thousand pandas were living in the wild. This extreme decline was due in large part to the panda’s drastically shrinking habitat due to human activity.  The Chinese government is now totally dedicated to restoration of the giant panda’s domain through reforestation and bamboo planting.  Another aspect of China’s effort to save their black and white mascot has been the creation of “Camp Panda” – a program dedicated to reintroducing panda cubs into the wild.  It is this program which Thimmesh devotes the bulk of her book.   Though the ultimate goal is to generate a panda population that can survive and breed without human intervention, Camp Panda’s support even involves scientists donning giant panda outfits as they enable baby pandas to become self-sufficient in the wild.

Camp Panda is a captivating story of both the amazing giant panda as well as the human dedication involved in working to save this animal species. 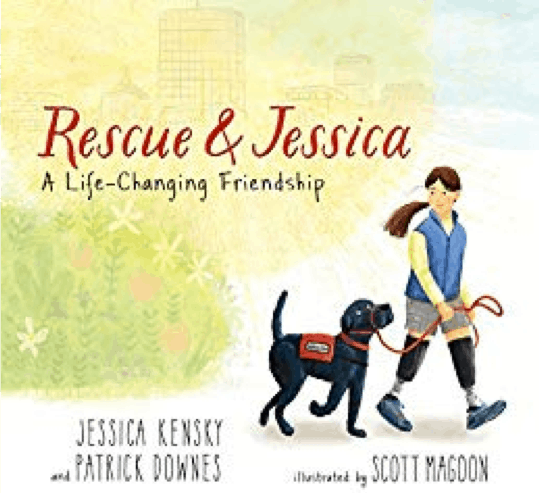 by Jessica Kensky and Patrick Downes, illustrated by Scott Magoon

This compelling story tells of the relationship between Rescue, a service dog, and Jessica, who has lost her leg in an accident.  Rescue is initially trained to be a Seeing Eye dog but his trainer finds he is not suited for this role. Eventually, Rescue finds his place as a service dog.  Meanwhile, Jessica is attempting to cope with everyday life, using a prosthetic leg and a wheelchair.  Not until she is paired with Rescue, does she experience a sense of hope as she looks to the future.

Detailed are the many ways that Rescue is able to ease life for Jessica.  But most important is the loving bond that is formed between the two of them.  Each gives the other a sense of purpose and comfort as they work together to make the days they share fulfilling.

The authors, a married couple who were injured in the Boston Marathon bombing, draw upon their own experiences as inspiration for the essence of this story. The book received the 2019 Schneider Family Book Award that recognizes children’s books which attain excellence in the portrayal of the disability experience.