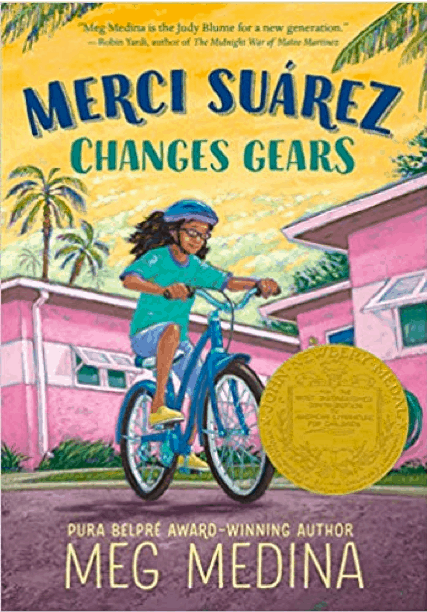 (most outstanding contribution to children’s literature)

A new school year holds fresh experiences and challenges for all young students.  Merci is no exception.  She tells her story with honesty and spunk, reflecting the typical emotions and observations of a 6th grader.  Merci, a scholarship student to Seaward Pines Academy, is entering 6th grade, which means homerooms, lockers, switching classes and trying out for sports teams.   But other changes abound as well, as she deals with trying relationships in school as well as changing dynamics in her own family. Merci lives with her extended family in three “casitas”. She loves helping her Papi with his painting business after school and being an occasional sub in her father’s pickup soccer games, while on the other hand reluctantly babysits for her aunt’s rambunctious twins. But her most treasured relationship is with Lolo, her grandfather, who is always there for her as a reliable companion to whom she can confide her thoughts and feelings.  Recently, however, Merci has seen disturbing changes in her Lolo, which puzzle her as she tries to make sense of it all.

This Newbery Medal winner deals forthrightly with Alzheimer’s as well as the transforming relationships with which tweens are faced.  Merci wishes that everything could stay the same, but in the end realizes that changes are simply a part of life.  A precious gift, which Merci presents to her grandparents, reflects her heart and her growing maturity.  “I can handle change … it’s just a harder gear.” 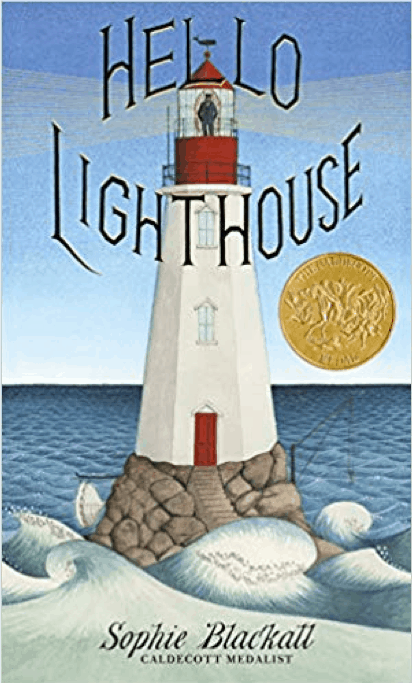 Hello, Lighthouse is an engaging, artistic tribute to lighthouses of old.  The often double-spread illustrations swirl with the circular shapes of the lighthouse, ocean waves, wind gusts, shimmering northern lights.  Rope-like circular frames frequently outline many of the interior scenes.  And within these, the quilted circles on a bedspread or the spiral colors of an area rug continue to reflect the curvature of this ocean home.  The story, which accompanies the artwork, tells of a lighthouse keeper, his duties, his solitary life, followed by sharing his lighthouse days with his wife. Life in a lighthouse has its challenges and joys.  The sparse text eloquently supports the illustrations with the occasional “Hello! Hello! Hello!” refrain, marking the approach of crashing waves, passing ships, migrating whales.  A two-page spread of notes, “About Lighthouses”, at the book’s end, provides fascinating supplemental material on lighthouses, which Blackall gathered in her research as well as her visits to lighthouses from New York to Newfoundland. 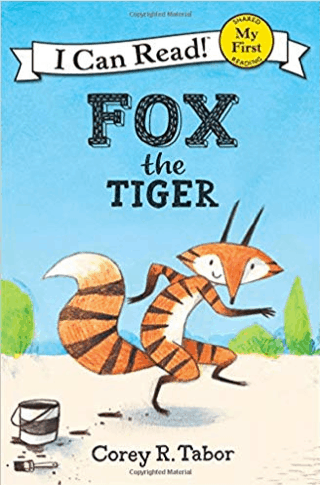 The age-old wish to be someone else is whimsically portrayed in this tale of fox and his yearning to be a tiger.  “Tigers are big …. sneaky …. fast.”  With a few paint strokes he transforms himself and then joins his friends, turtle and rabbit, who also are inspired to alter their appearances. Fun is had by all as they delight in their makeovers.  But their imaginary play comes to an end with an unexpected rain followed by a squirrel’s welcome observation!  With simply drawn pictures, Tabor skillfully illustrates the emotions of these animal friends to which a child will easily relate.  Fox the Tiger is a book in the “My First I Can Read” series” and one the emergent reader will want to return to again and again.