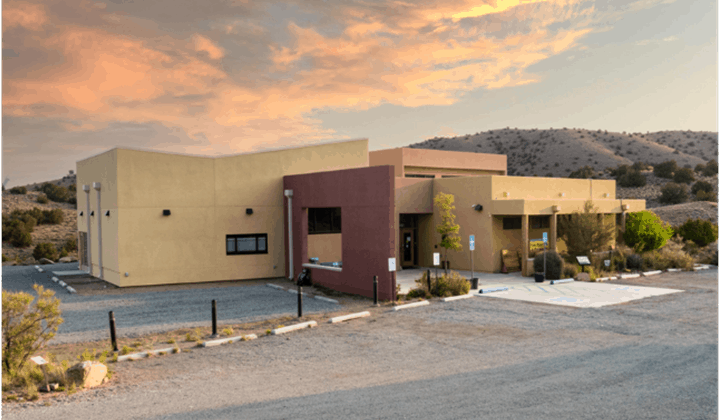 Placitas Community Library continues growing in understanding who we were, who we are, what we do, and who we aspire to become.  Indeed, we are humanists, growing, evolving, learning, and teaching.

While we imagine there may have been a library serving the community from the 1700s (before and since), we know that a library –the early Placitas Community Library- was established in the Historic Village of Placitas by Mrs. Frances Escarcida and Mrs. Adela Garcia in the early 1960s to serve the community and, primarily, students in the first elementary school.

The library was in the two-room school’s hallway that separated Ms. Baca’s class (pre-K through third grade) and Mr. Baca’s class (fourth through sixth grade). The Bacas were a sister-brother team of teachers. Parents’ love of learning and their commitment to academic growth for their children was the impetus for creating the library.

Mrs. Escarcida and Mrs. Garcia filled the library with books they brought from their personal collections –books from home. To charge the young students’ thinking, these moms pasted book jackets on the walls in the hallway where the library was housed -the children could get excited about and look forward to reading those books.

As they sometimes do, this library grew. Moving from the coal room in the San Antonio Mission the little treasured independent library did not close but transitioned to inside the school and became the new school library. Still, there were a few funds left in the early library’s coffers. Years passed as residents of Placitas took advantage of the libraries in nearby Bernalillo and Albuquerque.

Changing Needs of the Community

Communities evolve as do the needs of the people. In 2002 newcomer, Sue Strasia, placed an advertisement in the Sandoval Signpost (an award-winning publication –Thank you, Barb and Ty Belknap) asking “Does anyone think we needed a library in Placitas?” Some thought “No” and others said “Yes.” In some ways, the rest is history, but history weaves in many directions and seldom in a straight line. 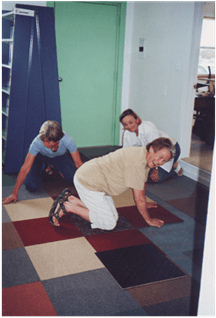 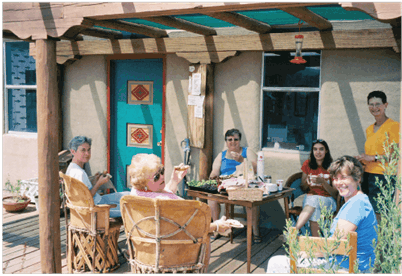 Where could/would it be? Pepi Strahl owned a small former mechanic’s shop that was serving as storage and a home for not-so-migratory mice. Pepi, the Library’s godmother, offered a room in her building on Tierra Madre rent-free for one year.

First, we had one room, then two, then three, then the garage! Pepi had to get a separate storage unit for her own items after lending all her space to the library. Volunteers got on their hands and knees to prepare the floor for donated carpeting.

They painted, scrubbed the toilets, you name it; if it needed to be done, they did it. The generous people of Placitas donated books, maps, shelving, chairs, a circulation desk, videos, and a Rolodex (does anyone remember what this was or what it did for us?). All the while, committees formed.

The Adult Programs and Children’s Programs immediately began to offer educational and growth-inspiring programs. The newly formed Landscaping Committee solicited plants and grasses from individuals and from nearby nurseries. Crawling in the Placitas dust, they planted “buffalo grass,” watered it regularly and tried to make a nice grassy area for children to play outside. This was a happening thing. 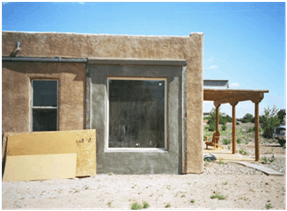 The Need for More Space

Many other contributions flowed, including a picture window, roofing, a computer, a printer, and legal support. All resources were donated and everyone involved was a volunteer; we purchased nothing and there was no paid staff until 2012. After six years in the small, overflowing well-used building, it was clear Placitas Community Library needed more space. Several volunteers approached state and county officials for support. Sandoval County Commissioner Bill Sapien was among the first government officials to recognize the library volunteers’ efforts as feasible. He allocated the library’s first Sandoval County funds. Many of us consider him a godfather to the library.

As the community’s needs outgrew the building, volunteers strategized further and raised funds. Bake-sales, plant sales, book sales brought in money, as did financial contributions from the community and State and County Government Operations (GO) Bonds.

Though community members made generous contributions, even more money was needed to build the space New Mexico State Library determined would be appropriate, based on the size of the population. We needed half a million dollars and our federal representatives, led by then Congresswoman Heather Wilson, allocated $500,000+ to build. As history weaves and various people tell their parts of a story, any story, new information emerges and parallels reveal themselves.

At the groundbreaking ceremony for the first phase of the current building in 2009, Ann Rustabakke, Chair of the Board of the first Placitas Community Library, literally and ceremoniously, passed that legacy to PCL by giving the last $1000 of funds that had been leftover from the early Placitas library. Clearly, there are more stories, likely as many stories as there are people. We plan to tell more stories of the history of Placitas Community Library as we move forward. 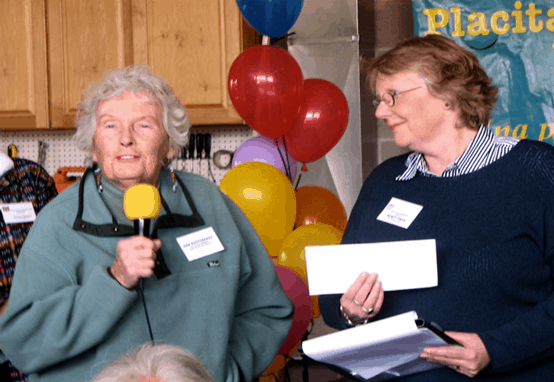 Placitas is a dynamic, multicultural community with many rich stories; the Collin Meeting Room of Placitas Community Library is evolving, being re-invigorated to be an education space for Placitas History. While many Placiteños are newcomers, arriving in the 1940s 50s, 60s and later, there are many families whose histories extend much further in the past; all can enlighten us about who we were, who we are, what we do, and who we aspire to become. We work to maintain dignity, integrity, and respect for ourselves and others as we encourage everyone to help Placitas and the library grow.