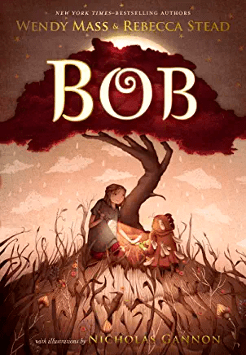 This month’s books have the theme of:

By intertwining magic and mystery, talented middle grade authors, Wendy Mass and Rebecca Stead, create a heartwarming tribute to friendship.  Five years have passed since ten-and-a-half-year-old Livy and her family have visited her grandmother in Australia.  She remembers little of her last visit, though she has a fuzzy recollection of a strange chicken.  This memory becomes a reality once she opens her bedroom closet door and encounters Bob, a short, green creature outfitted in a chicken suit!  He is rather perturbed for he has been waiting in the closet for Livy for 5 years, trying to entertain himself and worrying about her fate at the same time.

Thus, begins Livy and Bob’s reacquaintance, along with a shared mission.  Bob has no recollection of his family or where he came from. Livy had once promised she would help him find the answers.  Clues gradually appear that lead the two to an explanation and, in the process, they rekindle a charming and enduring friendship.  Livy and Bob narrate their journey in alternating chapters, each with their own distinct voice.  Livy is a perceptive and determined ten-year-old while Bob is a delightfully eager and curious creature, trying to put together his lost memories.  By the story’s end, one can’t help but feel charmed by them both.  Gannon’s black and white illustrations, interspersed throughout the chapters, create a gentle reality to this satisfying and entertaining tale of childhood and magical friendships.

Monster and Boy, by Hannah Barnaby, illustrated by Anoosha Syed

Monster has contentedly slept under his boy’s bed for years.  But then one night, he hears the boy’s mother declare that there is “no such thing as monsters.”  Feeling he has been relegated to the world of imaginary creatures, monster is determined to right this perception.   So he risks appearing before the boy with a grand “Ta-da!” Here begins a series of mishaps that will have young readers giggling in delight.  Motivated by curiosity and bravery, monster and boy find themselves engaged in some creative problem solving to right the situations they find themselves in. With faith and love the two improbable friends succeed , “holding the secret of each other deep down inside.”

Barnaby cleverly narrates this tale of friendship and imagination with an intimate storyteller voice, inviting the readers to share thoughts as if personalizing the tale just for them. Syed’s illustrations reflect the light humor of this early chapter book of friendship adventure. 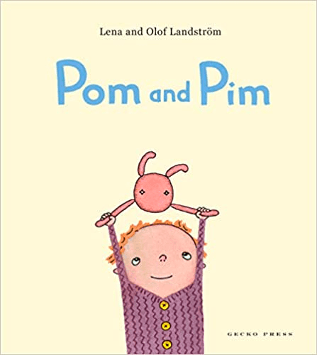 Pom and Pom, by Lena Landström, illustrated by Olof Landström

This endearing tale of a young child and her well-loved stuffed companion is reminiscent of the fortunately/unfortunately theme. In this case, the two friends encounter good luck followed by bad luck which inevitably leads to good luck and so forth.  The brief text on each page is just enough to support the spare pictures of Pom and Pim as they go about their day.  Young ones will easily perceive Pom’s various emotions in his expressively drawn face. By the time the story has neared its end, they will be calling out good luck or bad luck as each scene appears with a turn of the page.  Scandinavian husband and wife, author and illustrator, have created an amusing tale just right for toddlers.